Tucker Townsend, son of Christopher and Leigh Townsend, is a 16-year old boy with Mitochondrial Disorder.  He was born at 27 weeks gestation, weighing just 1 pound and 11 ounces.  Tucker spent over 8 months in the NICU at Woman's Hospital, and his parents took him home with a tracheotomy tube and ventilator.  He had home nursing for 12 hours a day until he was 3 years old.  Tucker also had a feeding tube for nutrition as he ate less than 1% of his food by mouth.


Tucker has many health problems that cannot be explained by his prematurity, such as developmental delay, autistic characteristics, GI issues, and microcephaly (small head).  These issues led his parents to seek out Mitochondrial testing, which led to a diagnosis of Mitochondrial Depletion Syndrome in July 2010.  This means that at a basic cellular level, Tucker's body does not work the way it is supposed to, and his cells do not have enough energy to perform many functions.  Tucker's Mito has manifested in his neurological symptoms, but there is a chance that it could affect his heart, liver, kidneys, or other systems in the future.  Mitochondrial Disorder is considered life-threatening and his prognosis is uncertain.


Tucker attends Dutchtown High School in a special needs classroom, where he works hard and enjoys school.  Thanks to Fishing for Tucker, Tucker receives 12hours per week of Applied Behavior Analysis (ABA) therapy in addition to school.  Tucker works  with a proven program for kids with autism and other delays.


Tucker is very frustrated when he cannot express himself, which leads to him grinding his teeth (which will have permanent damage if he continues) and also pulling his hair and needing anxiety medicine.  The more that he can talk, the less that he displays these other behaviors and needs the interventions.  The ABA Program started in June 2011, and this program has completely changed Tucker.  His behavior has improved dramatically, and he has started talking all the time!!  The ABA Program has allowed the family to "unlock" the Tucker that has been there all along.


Because of Fishing for Tucker, Tucker’s parents have been able to fly in an ABA Feeding Specialist from Philadelphia several times a year that has helped Tucker go from eating no food by mouth to eating 100% by mouth.  Thanks to this program, in 2014 Tucker got his feeding button removed.  He had 3 surgeries in 2014, as his body has a hard time healing.  Thanks to Fishing for Tucker, Tucker's parents were able to care for him and help him to heal without having to worry about the cost of the necessary surgeries.


Since the beginning of Fishing for Tucker, it is impossible to share Tucker’s progress without mentioning the tournament in the same sentence.  There are generally so many roadblocks and issues getting help and care for people with extra needs. The funds from Fishing for Tucker have allowed Tucker’s parents to break through so much of the “red tape” so that he has everything he needs to thrive. Some examples in 2020-2022 include a medical stroller, extra therapy session, and the costs of multiple trips to Houston to see the world renowned mitochondrial specialist.


We could never thank the leadership, fishermen, and sponsors enough. You all have given Tucker so much!

A HUGE Thank You to everyone who has helped us reach an impressive $194,785 donated for Tucker since the event's inception in 2011.

This is a true testament to the generosity and all around goodness of South Louisiana Fishermen and the South Louisiana Community as a whole. It has never been more clear that "no man ever stood so tall as when he stooped to help a boy." 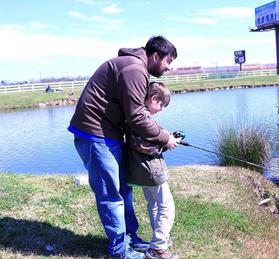